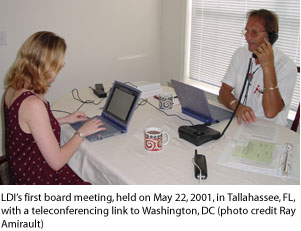 Annual Report 2001. This report covers the history of LDI since the time - approximately mid-1998 - when the idea to establish the Institute became a seriously pursued initiative. The specific focus of the report is on LDI's efforts during the first phase of its existence to generate communities of mind around significant questions related to the development of learning. The report was approved by the Board of Directors of LDI in its meeting of May 22, 2001.

Annual Report 2002. This report covers the period between LDI's Board of Directors meetings of May 22, 2001, and June 18, 2002. Its specific emphasis is on LDI as a networked institution and LDI's growing resilience in responding to the challenges afforded by the world with which the Institute interacts. The report was approved by the Board of Directors in its meeting of June 18, 2002.

Annual Report 2004. Report presented orally to the Board.

Annual Report 2005. This report will serve as an input to the Board's discussions during its annual meeting scheduled for July 20, 2005.